Published October 31, 2014
The Annual Kilmyshall Field Day took place on Sunday 20th July. This is the
Parish’s main fundraising event of the year. Many parishioners help out
at this time, and Kilmyshall Parish Council would like to thank all those in
the community who helped in any way in preparing for the Field Day and
all who helped on the day. A special thanks to all who supported us on
the day which contributed to it being a great success and raised a net to-
tal of €7000.00 . Well done to everyone!
A very special thank to all the businesses in Bunclody & Kilmyshall who
supported our Field Day so generously with donations of prizes. A spe-
cial word of thanks Steemer’s O’ Leary for their sponsorship of the ‘Loom
Band’ Competition. The winners received a beautiful Trophies. 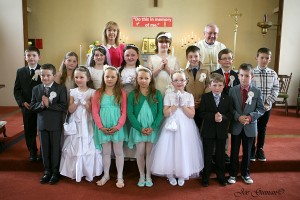 Published October 31, 2014
Fr. Duffy celebrated Mass on Southeast Radio from Kilmyshall Church on Sunday
May 11th. The choir lead by Eileen Carton provided the lovely music and singing.
On Sunday August 17th Mass was broadcast from Kilmyshall again with the folk
group lead by Jennifer Byrne providing the music. on Sunday 17th August. Well
done to everyone concerned.

The Parish Council extends sympathy to the following in our community who suffered bereavements: